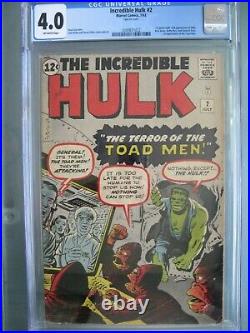 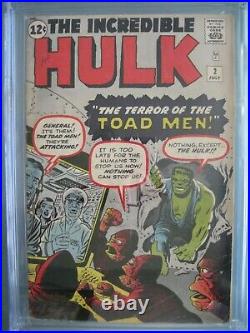 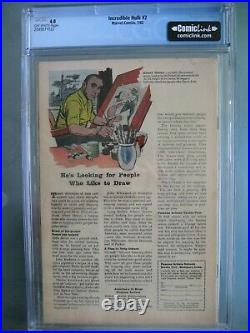 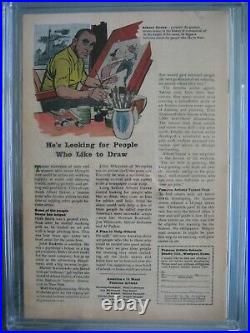 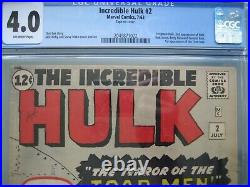 July 1962 Marvel Comics. 1st green Hulk 1st Toad Men. Stan Lee (Story) Paul Reinman (Art) Jack Kirby (Art & Cover) George Roussos (Cover). The Terror of the Toad Men! A sheriff sees the Hulk wade out of a swamp. He warns the inhabitants of his small town, who take refuge indoors. When the Hulk arrives, a truck rams into him, and a group of state troopers try to tackle him, all without effect. Rick Jones arrives and leads the Hulk away. The next morning, after the Hulk reverted back into his human form Bruce Banner, Banner pleads with Rick to leave him, since he cannot control the Hulk and doesn’t want his friend to be killed, but Rick refuses, since Banner saved his life in the accident that caused Banner to become the Hulk at night. Banner then says that there is no place where he can hide the Hulk, and says that every night will be a war between Hulk and mankind. Their mind detector puts them on the trail of Bruce Banner, “the most brilliant scientific mind on Earth, ” so that they can gauge the potential resistance to their coming invasion. Banner and Jones meet General Ross and Betty Ross as they set out to conduct a little scientific research. They go to a cave Banner found; he has set up a ten-foot-thick concrete door that he hopes will keep the Hulk contained at night. Jones promises to seal and reopen the door for him. Suddenly, a beam pushes Banner and Jones against a wall and holds them there! Part 2: Prisoners of the Toad Men! General Ross and his men surround it. They go into orbit. The captain, Torrak, tells Banner that their fleet is ready to invade Earth and that their mastery of magnetism makes them invincible. Banner refuses to talk. The Toad Men send Jones back to Earth in a plastic cylinder. He bursts out of his cell and locks up the crew. Part 3: Bruce Banner, Wanted for Treason! Out of the wreckage steps Banner. Ross arrests him for treason. The Toad Men create an underground tunnel and escape; once clear, they fire a flare to summon their fleet. A fleet of alien ships has appeared in the skies. The Toad King overrides all the television and radio signals and makes an announcement. Part 4: Hulk Runs Amok! The Toad King says that his fleet will train all their magnetic rays on the Moon and draw it towards the Earth. If the Earthlings do not surrender, the Moon will crash into the Earth, killing everyone. Part 5: The End of the Hulk? In his cell, Banner watches the sun go down. As the Hulk, he breaks through the wall, destroys an artillery piece, and topples a guard tower. He remembers that Ross put him in jail. At Ross’s house, he frightens Betty, who screams and draws the attention of soldiers outside. Ross, the soldiers, and even a tank enter a tense stand-off with the Hulk. The soldiers pile on the Hulk, but he shakes them off. He grabs Betty, lifts the side of the house, and drops it back in place once he’s outside. At Banner’s lab, Betty asks, Who are you?? Why do you hate us so?? ” The Hulk says, “Hate you?? Why shouldn’t I hate you? Why shouldn’t I hate all mankind?? Look what men have done to me! Rick appears, but his efforts to calm the Hulk fail. Before the Hulk can attack Rick, the sun rises, and the monster transforms back into Bruce Banner. Told of the situation, Banner realizes that he must turn his Gamma Gun on the Toad Men fleet. No one knows how gamma beams and magnetic fields will interact, but it’s the only weapon that may work. With soldiers breaking down the door of his lab, Banner readies the gun. Jones holds them back with a fire hose. The gamma beam reverses the polarity of the Toad Men’s magnetic propulsion, sending the Toad ships spinning across the void of space, helplessly out of control… For saving the world, Banner is cleared of treason. Betty tries to tell Ross that Banner is a good man, but Ross still suspects there is a connection between Banner and the Hulk.. They will hound me no longer! For now the Hulk will fight back! On my own terms! The item “Incredible Hulk #2 CGC 4.0 Marvel Comics 1962 1st green Hulk & 1st app Toad Men” is in sale since Monday, February 1, 2021. This item is in the category “Collectibles\Comics\Silver Age (1956-69)\Superhero\Incredible Hulk”. The seller is “madeofmiracles925″ and is located in Dublin, California. This item can be shipped worldwide.