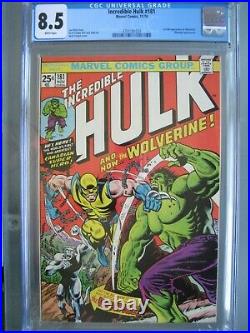 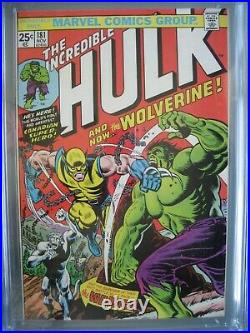 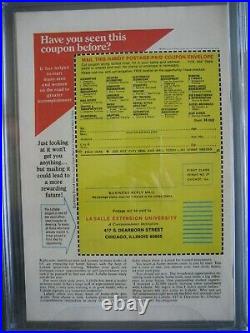 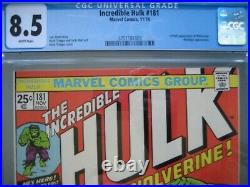 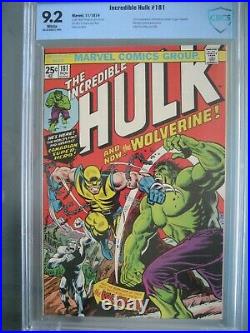 November 1974 Marvel Comics. 1st Wolverine (full) Wendigo appearance. Len Wein (Story) Jack Abel (Art) Herb Trimpe (Art & Cover). This book used to be a CBCS 9.2 (White Pages) then was submitted to CGC for a crossover. Graders were having a bad day. Possible clean and press for higher grade. Moderate 1 fingerprint smudge left center of front cover small residue right center of front cover smudge right bottom of back cover spine stresses f&bcvr very light rippling/warping cover. Collector demand for this issue, in which. Makes his first full appearance in a battle royal against the Hulk, is insatiable. Next to Spider-Man, Wolverine is the most popular superhero in the Marvel Universe and this book sits squarely in the legendary category! Shortly after this November, 1974 issue, Wolverine appeared in. #1 and became a permanent part of the most exciting superhero team of the last 4 decades. The offered example has been graded 8.5 by CGC and it has retained newsstand-fresh White Pages. The clawed hero Wolverine leaps out from the top of a rocky hill landing between the Hulk and The Wendigo. Scurrying onto the Hulk’s back, he begins swiping at him with his diamond-hard Adamantium claws, but even they cannot pierce the Hulk’s skin. Realizing that the Wendigo may prove to be an easier target, Wolverine springs over the Hulk’s head and launches himself at the Wendigo. His suspicions prove correct, and his claws rake into the woodland creatures hide. The Hulk, confused by this sudden turn of events, concludes that the “enemy of my enemy is also my friend”, so he assists Wolverine in stopping the Wendigo. The Hulk picks the monster up and smashes him through a grove of trees. Wolverine finishes the job by sinking his claws into the Wendigo’s throat. The Wendigo is an immortal creature, however, and even this seemingly fatal blow is not enough to kill him. For the time being, though, the Wendigo is unconscious. Now Wolverine turns his attention onto the Hulk. The fight is furious, but brief, until two bystanders, Marie Cartier and Georges Baptiste, use chemicals to knock them both out. Marie Cartier prepares once again to conduct an occult ritual that will remove the spirit of the Wendigo from her brother’s body, and transpose it onto the Hulk. With the Hulk unconscious, he slowly changes back into Robert Banner. Georges refuses to take part in Marie’s plan any longer. Arguing that it was bad enough when she intended on placing the curse on a mindless monster, but now she plans to subject an innocent human being to the curse of the Wendigo. Georges angrily storms off. Marie tries to drag Banner’s body back into the cave with the unconscious Wendigo, but Banner awakens and just as quickly turns back into the Hulk. Wolverine revives as well and the two begin fighting once again. Marie flees from the battle and races back into the cave. The Hulk swings a mighty punch, but Wolverine manages to roll just in time so that it is only a glancing blow. The punch is still strong enough to knock him out however. Inside the cave, Marie discovers that Georges has completed her occult ritual. He has transferred the power of the Wendigo out of Paul Cartier’s body and placed it inside his own. As the new Wendigo, the last vestiges of Georges’ intellect quickly fade away, but not before he manages to profess his love for Marie Cartier. The Wendigo turns and smashes through a section of cavern wall and runs off into the forest. Paul Cartier is now forever free of the curse of the Wendigo. Hulk doesn’t understand. And now he fights Hulk’s enemy? But if Hulk’s enemy is little man’s enemy… Then little man is Hulk’s friend! The item “Incredible Hulk #181 CGC 8.5 WP (was CBCS 9.2) Marvel 1962 1st app Wolverine” is in sale since Monday, March 1, 2021. This item is in the category “Collectibles\Comics\Bronze Age (1970-83)\Superhero\Incredible Hulk”. The seller is “madeofmiracles925″ and is located in Dublin, California. This item can be shipped worldwide.